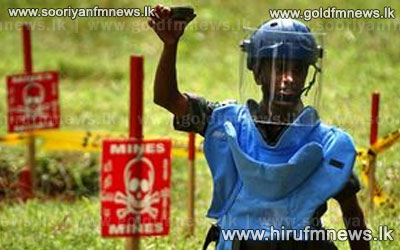 The military states that 98 % of de-mining has been completed in the North & East subsequent to the war.

Military Spokesperson Brigadier Ruwan Wanigasooriya expressing his views to our news team stated that only around 100 square kilometers was left to be de-mined.

The International Day for de-mining was celebrated yesterday during a function which was organized by the Swiss Foundation for Mine Action or FSD.

Project Programme Manager of FSD Clinton Smith speaking here noted that de-mining activities had been hampered due to donor withdrawal.

However commenting in this regard Military Spokesperson Brigadier

Ruwan Wanigasooriya noted that de-mining activities conducted by the military were progressing unhinderedly.