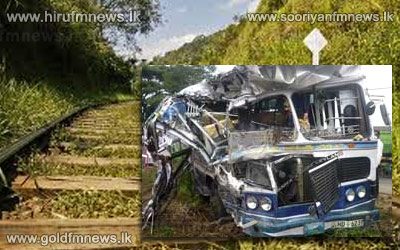 The driver and conductor of the passenger bus which met with an accident at Yangalmodara in 2005 after colliding with a train killing over 40 people, were sentenced to death by the Kurunegala  High Court today.

The High Court judge ruled that the driver and conductor were responsible for the death of 41 passengers and creating bodily harm to around 35 others.

The privately owned Colombo-bound passenger bus from Galkiriyagama collided with an inter-city express train running from Colombo to Kandy in May 2005.

152 charges were filed by the Attorney General against the bus driver & its conductor.

Kurunegala High court Judge Priyantha Fernando passing sentence today convicted the suspects guilty of 27 chargers, sentencing the duo 10 years each for a single charge, there by bringing the total numbers of years commuted on them to 270.

Moreover each charge also carried with it a 500 rupee fine.

However if the suspects were unable to pay the fine they would be commuted an additional prison sentence amounting to 27 months.

Chairman of the Lanka Private Bus Owners Association Gamunu Wijerathna expressed the following views with regards to steps taken by the LPBOA to instill discipline in private bus owners & conductors.