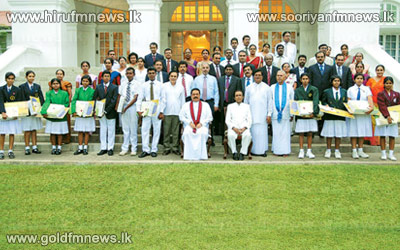 The names of the students who obtained the best results in the GCE O/Level examination were published yesterday evening.

According to the results released two students had obtained joint first place in the Island.

They are Dasun Oshadha from Royal College, Colombo and Chathurika Kulatunga of Sangamitta College, Galle.

Gayathri Alwis of Sangamitta College, Galle had obtained second place in the island rankings and Madasmitha Ranawaka of Vishaka Vidyalaya, Colombo who is the daughter of Minister Patali Champika Ranawaka, has obtained 3rd place.

The students who had obtained the first 10 places in the Island met with President Mahinda Rajapakse yesterday evening at Temple Trees.

The President who bestowed his congratulations on the students presented them with laptops and cash prizes.