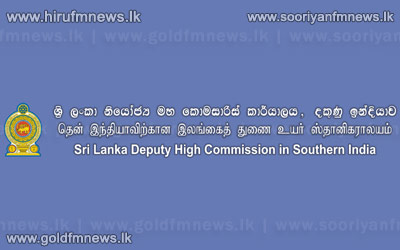 The Ministry of External Affairs states that Sabirullah Khan who has been appointed the new Sri Lankan Deputy Commissioner to India has not been provided with the required diplomatic visa papers by India.

According to the Secretary to the Ministry of External Affairs Karunathilleke Amunugama the Deputy High Commissioner had applied for his papers last December.

With the lapse of almost 3 months the documents remain yet to be issued while a clear reason has also not been cited.

Owing to this the Deputy Sri Lankan High Commissioner has been rendered unable to engage in diplomatic activities.

When inquired from the Indian embassy in Sri Lanka it had noted that it was the Indian centre which was responsible for issuing the documents.

At present Ameer Ajwad remains the Deputy High Commissioner in Chennai while Sabirullah Khan remains as the Director General of the Finance division of the Sri Lankan Ministry of External Affairs.

Meanwhile a group of students representing Pudduchcheri had pelted the office of Indian Broadcaster Dooradharshan yesterday charging that it had failed to cover the recent spate of protests against Sri Lanka which were recently observed in the Indian state of Tamilnadu.

12 suspects have been placed under arrest by Indian authorities in connection to the attack.