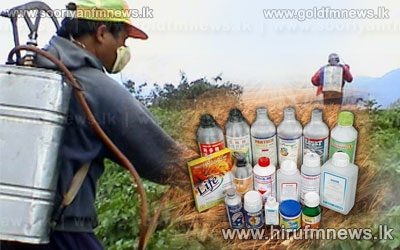 Minister of Agriculture Mahinda Yapa Abeywardhana states that the government has proscribed the use of 3 verities of agro chemicals.

Addressing a media briefing held at the Weligama Urban Council Minister added that these varieties of agro chemicals had been proscribed from use based on recommendations submitted by the Pesticides Committee.

Minister Abeywardhana also noted that this decision had been ancillary influenced by the prevalent kidney disease currently spreading in the Rajarata area.

Minister of Agriculture Mahinda Yapa Abeywardhana speaking to our news team expressed the following views in this regard.

The decision to ban the use of these agro chemicals comes in the wake of the increased number of kidney patients, the highest of which are being reported from the Madawachchiya area in Anuradhapura.