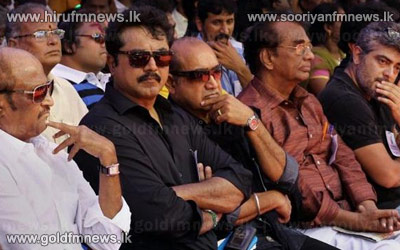 The Rawana Balaya Organization states that movies starring South Indian actors who protest against the island should be banned.

Officials of the Rawana Balaya Organization who handed over an epistle to the Public Performance Board today are also hopeful of meeting officers of the film cooperation.

In its epistle the Rawana Balaya Organization requested of the Public Performance Board to ban the screening of films starring south Indian actors who protest against the island as well as their screening.

Chairman of the Public Performance Board Gamini Sumanasekara speaking to our news team however noted that the PPB was unable to entertain such a request.

Meanwhile Secretary of the Rawana Balaya Organisation Venerable Iththakande Sadha Thissa Thero expressing his views to our news team noted that his organization hopes to meet officials of the Film Corporation tomorrow.

Moreover The National Association of Sri Lankan Artists has organized an ‘adishtana pooja’ this Thursday.     Veteran actress Malini Fonseka speaking to our news team had these views to share in this regard.

In related developments, several news paper headlines published today stated that the Lanka Workers Congress had called for a ban on South Indian movies starring south Indian actors in them who protested against Sri Lanka.

These news paper reports quoted T.V. Sennan, Advisor to the Lanka Workers Congress. When contacted by our news team he had this to say.

Meanwhile the all party Indian Parliamentary Delegation arrived at the parliamentary complex today.

The group who observed parliamentary proceedings from its gallery subsequently engaged in cordial discussions with Speaker Chamal Rajapaksa.

The group is due to mark their stay in the island until the 12th of this month.