India funded the LTTE - another exposÃ© by Wikileaks 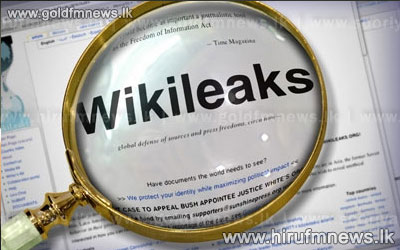 It is a public secret that the LTTE and India had a close relationship.

The Wikileaks website made another revelation regarding this today.

According to a cable sent by the Indian Embassy and released by Wikileaks, a cable dated April 5th, 1988 cites newspaper reports, which quoted J N Dixit, then Indian envoy to Sri Lanka that a stipend was agreed upon and was to be paid to the LTTE by the Indian government in view of the tax loss it suffered after IPKF was sent.

The US cable said 5 million rupees was the compensation paid to the LTTE in July 1987 and only one payment was made before September that year when LTTE walked out of the deal over its participation in the interim council.

An unnamed LTTE spokesman in Madras is quoted as saying that the payment was part of a larger secret package of guarantees, which Prime Minister Rajiv Gandhi offered LTTE leader V Prabhakaran in July 1987 to get him to agree to the bilateral accord.

Other features of the package for the LTTE included an assurance of an offer of 7 out of 12 seats to enable it to form a majority in the interim provincial council in the north and east of Sri Lanka.

India said it would route 1 billion rupees through the interim council to rehabilitate Jaffna besides 40million dollars that was agreed upon by New Delhi at an earlier consortium meeting in Paris.

The Indian government also promised to develop a police force after the formation of the interim council.

Despite all this the cable said, the deal fell through almost the same day.

Whistle blowing web site Wikileaks also reveled of a threat issued by the LTTE in 1989, where it had intimidated DMK Patriarch Muththuveil Karunanidhi stating that Tamilnadu would be devastated with violence so that the provincial government of Tamilnadu would be brought under the jurisdiction of the Indian Centre.

A cable intercepted from the American Consul in Channai which had been sent to the American Embassy in New Delhi & the US State Department had contained this message.

According to Wikileaks this threat had mounted pressure on Karunanidhi, thereby coercing him to support the LTTE.

The Ravana Balaya Organization presented an epistle to the National Film Corporation today requesting that films starring South Indian films stars who are protesting against Sri Lanka not be screened in Sri Lanka.

Convener of the Ravana Balaya Organization Venerable Iththakande Saddathissa Thero, made the following statement after the epistle was presented to the film corporation.

The Ravana Balaya Organization also handed an epistle yesterday to the National Censor Board making the same request.

However the chairman of the Censor board Gamini Sumanasekara stated that he cannot take such a decision.