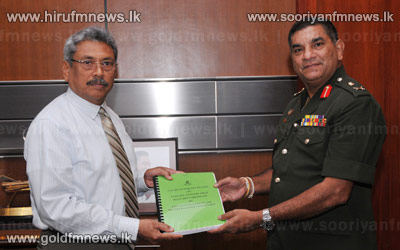 Army Commander Lieutenant General Jagath Jayasuriya handed over the first part of the Court of Inquiry Report to the Defense Secretary Gotabaya Rajapaksa at the Ministry of Defense today.

The report notes that the Court upon examining senior field commanders and infantry, armor, artillery, intelligence, civil affairs and medical officers who had participated in the Humanitarian Operation concluded that the LTTE had violated international law with impunity by committing various unlawful acts such as using civilians as human shields, placing of artillery and other heavy weapons amidst civilian concentrations and illegal conscription of civilians.

The report also notes that evidence before the Court has conclusively established that the Humanitarian Operation was conducted strictly in accordance with the “Zero Civilian Casualty” directive made by President Mahinda Rajapaksa and commanders, even when the military was fired upon by the LTTE from no fire zones.