Large numbers of commuters witnessed in Colombo ahead of festive season 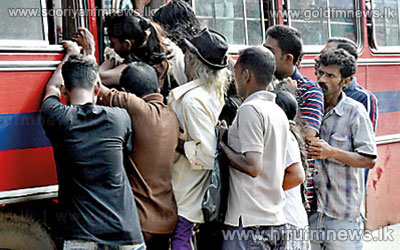 The Ceylon Transport Board states that it has deployed 530 buses bound from out station towards Colombo in view of the festive season.

According to the Manager of the Colombo Central bus stand these buses are due to operate on a 24 hour basis.

Moreover a special train service is also in effect since the 07th of this month in order to facilitate the transportation requirements of commuters traveling during the festive season.

Meanwhile 750 buses have been deployed by the National Transportation Commission in order to facilitate commuter requirements during the new year.

Chairman of the NTC Roshan Gunawardhana speaking to our news team expressed the following views in this regard.