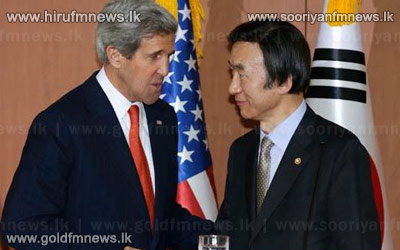 US Secretary of State John Kerry demanded North Korea scrap an expected missile test and dial down its virulent rhetoric -- but also backed new peace overtures by Seoul and appealed for reason to prevail.

As Pyongyang aimed fresh nuclear threats at Japan, Kerry urged China to step in and said the North would never be accepted as a nuclear power.

Visiting Seoul to give full US backing to military ally South Korea, Kerry mixed tough talk with more conciliatory comments about the prospects for a peaceful way out of a crisis that has sent inter-Korea tensions soaring.