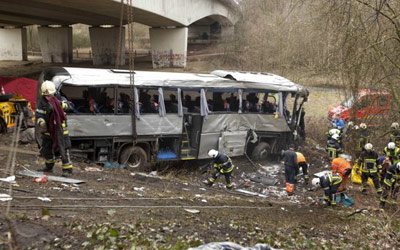 A Polish bus carrying Russian youngsters crashed and ended up on its side under an elevated highway near the port city of Antwerp, killing at least five people and leaving five more critically injured.

The accident in Ranst happened at dawn and no other vehicles were involved at first sight, said mayor Lode Hofmans.