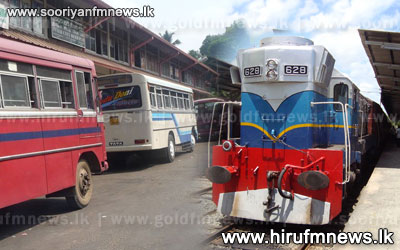 The Railway Control room states that delays are being experienced in scheduled trains today since locomotive operators who had obtained leave in view of the festive season had not returned to serve in their respective capacities.

According to the railway control room delays in train services are being experienced on the main track, the Kelaniweli line, Northern railway line, the coastal line & the Batticaloa line.

However according to the Railways Department steps have been taken to summon those on leave.

The Railway Control room expects that train services would resume as per normal tomorrow.

Railways Chief Controller Gunapala Withanage speaking regarding the matter had this to say.

Moreover the National Transport Commission states that steps have been taken to deploy extra buses in order to facilitate the transport requirement of commuters returning to the capitol subsequent to their festive vacation.

According to Chairman of the NTC, a rather dense commuter presence is being experienced in bus services which are being attributed to delays in the railway sector.