41 engaged in a strike inside a mine. 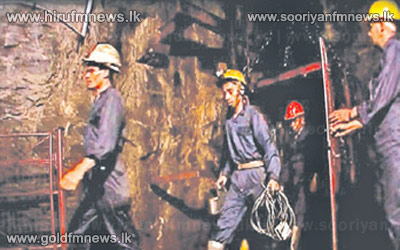 41 individuals initiated a hunger strike inside a 150 feet deep lead mine situated in the Kurunegala – Gokarella region.

The strike was initiated demanding solutions to the issues regarding New Year bonus that was given to the employees of the mine.

The 41 employees had climbed down into the mine and stated that they are initiating the hunger strike.

Following reports of the hunger strike, based on instructions issued by the Assistant Commissioner of the Kurunegala Labour office, several officials arrived on scene.

Despite requests from the officials for several employees to climb to the surface to engage in discussions, the employees had refused the offer.

They had stated that if the officials wanted to resolve the situation, the chairman of the Kahatagaha Graphite Company should enter the mine and discuss with them.

Upon inquiry by our news team, the Chairman of the Kahatagaha Graphite Lanka D. Kalansuriya stated that he is en route to the mine to find facts.