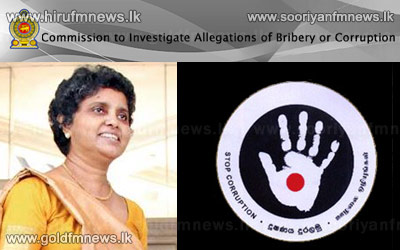 The Bribery or Corruption Commission has requested the Immigration and Emigration Department to prevent former Chief Justice Shirani Bandaranayake from leaving the country.

Bribery Commission Director General Lakshmi Jayawardhana told our news team that she had requested the Immigration and Emigration Department to prohibit the former CJ from leaving the country till probing into complaints lodged against her at the commission ended.

Former CJ Dr. Shirani Bandaranayake appeared before the Bribery or Corruption Commission for the first time on 18th last Month.

That was to make a statement with regard to the complaint filed against her charging her of improper earning of assets.

The Bribery or Corruption Commission had issued notice to the former CJ under the relevant charges.

Meanwhile, while the former CJ appeared before the Bribery Commission for the second time on April 1st,  she did not give any written statement on that occasion.