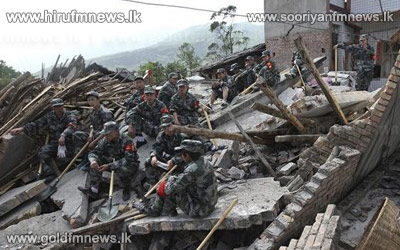 A powerful earthquake has killed at least 160 people and injured at least 5,700 in China's rural south-west.

The 6.6-magnitude tremor sent people fleeing from buildings across Sichuan province, which was devastated by a massive quake five years ago.

Villages close to the epicentre in Lushan county were left in ruins.

The rescue operation is being hampered by collapsed roads, broken telephone lines and regular aftershocks

Thousands of troops have been sent to Sichuan, and Premier Li Keqiang has arrived in the area.

Rescuers have been able to pull some bodies and survivors from the rubble of devastated villages.