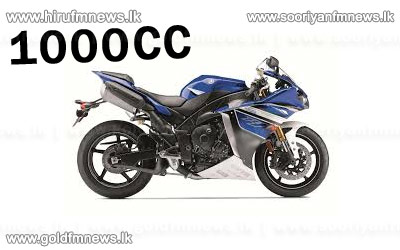 The Department of Motor Traffic has decided to give the go-ahead for the registration of motorcycles exceeding the 1000 cc class.

According to the Commissioner General of Motor Traffic H.S. Harischandra the gazette notification in this regard has already been issued while registrations would be possible from next week.

However Harischandra noted that motor cycles exceeding the 1000 cc category which have already been imported to the island at present would only be permitted registration for racing purposes.

The Commissioner General of Motor Traffic nevertheless noted that motorcycles which are registered exceeding the 1000 cc capacity would not be permitted to operate on public roads since the cylinder capacity of motor bicycles provided to the Traffic Police stands at 600 cc.

However two 1000 cc motor bicycles have been provided to police on the Southern Highway enabling them to carry out spot checks on vehicles plying the highway.

When inquired from Acting Police Media Spokesperson SP Prishantha Jayakodi concerning the legal aspects of detaining bikes which infringed upon the law, by operating on public roads he noted that he would only be able to comment on the matter upon having studied the situation comprehensively.

Moreover the Commissioner General of Motor Traffic speaking to our news team noted that immediate measures are underway to revise the existing speed limitations applicable to highways.

The current optimum speed limit applicable to highways at present stands at 70 kilometers per hour.