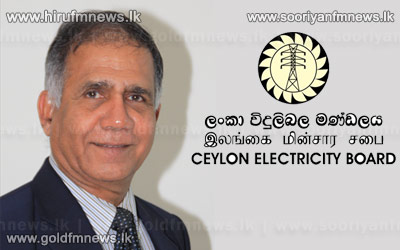 The Secretary to the Ministry of Power & Energy M.M.C. Ferdinando stats that subsequent to the initiation of thermal power plants in January 2014, there exists a possibility to reduce electricity tariffs by cutting down on the fuel adjustment charge.

Ferdinando made this observation while addressing heads of Media institutions at temple trees this afternoon.

The 2nd & 3rd phases of the Norochcholai power plant remain due to be completed during the months of October & December this year.

Upon completion of these phases the Norochcholai power plant will synchronized 300 & 600 megawatts of electricity to the national grid collectively.

Thermal power production which is done utilizing coal costs only 1/3’rds of the production cost utilized to produce electricity aided by fuel.

Hence according to the Secretary to the Ministry of Power & Energy this will enable the ministry to wave off the fuel adjustment charge, thus bringing down the cost of electricity tariffs.

Moreover during today’s media briefing which was held at temple trees journalist questioned the president regarding a statement which was made by Deputy Minister of Power & Energy Premalal Jayasekara yesterday.

Deputy subject minister Premalal Jayaseka asserted yesterday that a discussion aimed at reducing the revised electricity tariffs was due to be held today under the patronage of President Mahinda Rajapaksa.

In response to the queries posed by journalists President Mahinda Rajapaksa added that he had not been informed regarding such a request by the Ceylon Electricity Board.

However he noted that if such a request was intimated, he was willing to consider.

Moreover Minister of Power & Energy Pavithra Wanniarachi was also among those present during the discussion which was held at Temple Trees today.

Speaking here she noted that when she had assumed duties at her subject ministry it owed a staggering 304 billion rupees to various institutions in debt.

She also noted that the general public would not be majorly affected by the new price hike in electricity tariffs.

However during yet another media briefing convened by the United National Party today, the actions of the Minister Pavithara Wanniarachchi came under strict condemnation.

Meanwhile Minister Basil Rajapaksa who was also present during today’s media briefing requested of heads of media institutions to educate the public on conserving electricity especially between 6.30 to 9.30 pm daily, when the consumption of electricity is at its peak.