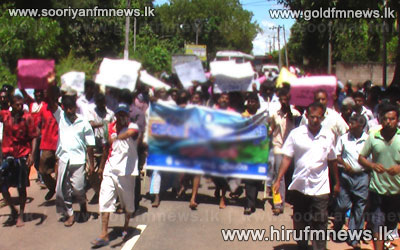 Residents of Uhana and Gonagolle on the Kandy Ampara road are staging a protest against wild elephant menace after a member of the Civil Defence Force was killed by a wild elephant yesterday.

The protesters told our correspondents that the authorities have taken no remedial measures even after several villagers were killed in the recent past.

They also claim the menace was increased after the elephant movements in the premises of the Ampara Hardy Technical College were barred during the Deyata Kirula exhibition.

When our news team contacted the Wildlife Conservation Minister Vijith Vijayamuni Soyza said that he and his officials would visit Ampara on May 5th  and 6th to discuss the matter in detail.

He also said that plans are afoot to introduce a natural fence that replaces the old electric one.