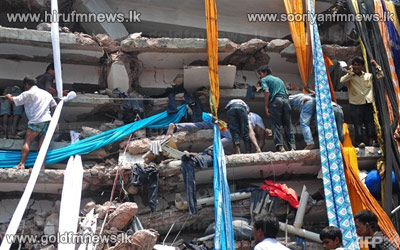 Only the ground floor of the Rana Plaza in the town of Savar just outside the capital Dhaka remained intact when the block -- which one minister said was illegally constructed -- imploded at about 9:00 am.

Armed with concrete cutters and cranes, hundreds of fire service and army rescue workers struggled to find survivors in the mountain of concrete and mangled steel which resembled the aftermath of an earthquake.

Corpses and the injured were evacuated from the higher reaches of the pile of flattened floors with makeshift slides made from cloth which just hours earlier was being cut into shirts and trousers for export to Western markets.