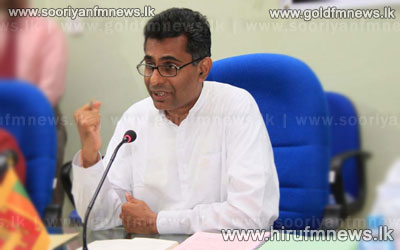 Former Power and Energy Minister Patali Champika Ranawaka said in a statement today that he objected to a formula proposed by the Finance Secretary on the electricity tariff hike on March 31st, 2013 and also wrote to the President in January making clear his objection to it.

Ranawaka who is currently the Minister of Technology, Research and Atomic Energy points out that the statement made in Parliament yesterday by Minister Pavithra Wanniarachchi suggests that the proposal to increase electricity tariffs, was proposed by him as the former Minister of Power and Energy.

Minister Ranawaka flatly denied the charge adding that he has not submitted any proposal to either the cabinet, the Ceylon Electricity Board or the President regarding a revision of electricity tariffs.

Minister Ranawaka also expresses suspicion over the reason to hike the electricity tariff at a time when all the tanks connected to the hydropower stations in Sri Lanka were full and overflowing.

Minister Champika Ranawaka insists that he had never proposed an electricity tariff hike during his tenure as the Minister of Power and Energy.

Minister Ranawaka said that certain media reports over the statement made by Power and Energy Minister Pavithra Wanniarachchi in parliament yesterday suggested that the recent electricity hike was his proposal.

The two ministers expressed these views…