Don't revise the electricity bill, revert it to the previous tariff instead tells UNP 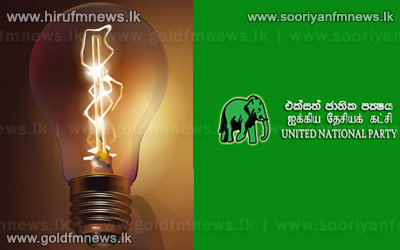 Reports carried by recent news papers stated that the government was planning on offering concessions to electricity consumers who utilize less than 150 units.

Even though the United National Party chargers that despite the planned 20% reduction, a furtively balanced formula under the fresh price revisions adds up to an eighty percent increase.

Hence General Secretary of the UNP MP Thissa Aththanayeke states that the price revisions to the electricity bill should be halted completely.

Meanwhile during a media briefing convened by the Engineers Guild of the Ceylon Electricity Board today, Chairman of the Guild Nandika Pathirage noted that certain individuals in an attempt to boost their reputation, hurled unfounded rumors at CEB, accusing them of malpractices.

Speaking here Pathirage challenged his accusers to prove the chargers which have been filed against them.

When asked if the CEB could refrain from obtaining electricity generated by private power houses, Chairman of the CEB’s Engineers Guild Nandika Pathirage noted that the government was only able to do so if it chose to abrogate the guarantee certificate issued to these institutions, a move which according to him could sever international confidence.