May day rallies all over the island. 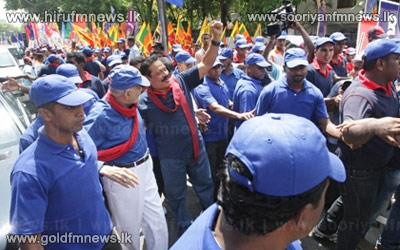 20 public rallies and 17 parades by major political parties, trade unions and other organizations were held to mark May Day in Colombo today.

UPFA coalitions Sri Lanka Mahajana Party began its parade from the White Ground at Maradana and joined the main parade at Borella Junction.

Other coalition Peoples United Front began its parade from the Ayurveda Junction and joined the main parade at D.S.Senanayake Junction.

UNP held two major rallies in Kurunegala and Badulla towns. Opposition Leader Ranil Wickremesinghe led the rally at Kurunegala which was represented by leaders of the opposition parties. UNP trade unions organized another rally at the UNP headquarters in Sirikotha this evening.

Under the theme of socialists against capitalism and the regime that disrupts the people was held by the JVP led by its leader Somawansa Amarasinghe at the BRC ground this evening.

JVP supporters who started the parade from S de S Jayasinghe ground in Dehiwala walked along the High Level Road and reached the BRC ground.

A coalition of the government National Freedom Front held a separate May Day rally under the theme of Defeat the Operation for a new Ealam and Reawaken the power of working people.

The NFF supporters started the parade from the St.John College sports ground in Dematagoda and walked to the P.D.Sirisena ground in Maligawatte to hold the main rally this evening.

Frontline Socialists Party held its May Day rally under the theme of Socialist Life at Kotahena Ratnam ground this evening.

Meanwhile the first May Day rally by the Democratic Party was held with the participation of its leader Sarath Fonseka at Pelawatte G.H.Buddhadasa sports ground in Battaramulla.

Expressing deep concern over the recent human rights violations in Sri Lanka, the US called on the country to ensure freedom of press adding that it will continue to support the need for justice and accountability in the country.

State Department spokesman Patrick Ventrell said he has seen the Amnesty International report and noted that it echoes many of the concerns the US raised in its own human rights report.

Meanwhile, bureaucratic inefficiency or negligence on the part of the Justice Ministry had resulted in Sri Lanka losing a US grant equivalent to 450 million rupees.

It was to be given for the purpose of upgrading the country’s judicial system by bringing it on par with modern technology and prevent legal delays.

Meanwhile a US Embassy spokesman confirmed that a US grant has been withdrawn because an agreement could not be reached with government officials.

The US grant was meant to develop a number of key projects planned to promote effectiveness of the judicial system, which included judicial and non-judicial training, the promotion of efficiency of the judicial process, introduce the latest technology on note taking and stenography so that the judicial procedure could be accelerated.