Those who supported Ealam are still active says President. 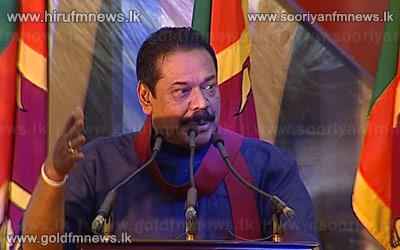 President Mahinda Rajapaksa says that the Opposition wants to fulfill the separatists’ needs.

The President said so while participating at the May Day rally the UPFA had organized at the Colombo Campbell park yesterday.

On this occasion the President said that those who fuelled the Elam concept earlier were now physically carrying torches to divide the country again.

However addressing the May Day Rally held at Maaligaapitiya in Kurunegala yesterday Opposition Leader Ranil Wickremasinghe said that the reason for the electricity tariff hike was the purchase of 10 new airbuses for the Sri Lankan Airlines.

The JVP May Day rally was held at the Colombo Havelock Town BRC grounds.

Participating at the JVP May Day rally JVP leader Somawansa Amarasinghe said that all should get together to protect the rights.

The NFF had organized a separate May Day rally this time at the Maligawatta P. D. Sirisena stadium.

NFF leader Minister Wimal Weerawansa expressed his views on the occasion as follows:

The Democratic Party led by Sarath Fonseka too held its May Day rally for the first time yesterday at the G. H. Buddhadasa stadium at Pelawatta in Battaramulla.

Participating on the occasion Democratic Party leader Sarath Fonseka said that nothing had been done for the worker’s wellbeing.