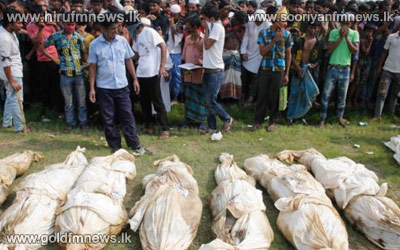 Bangladesh rescuers said at least 550 people likely died in the collapse of a garment factory complex last week as the pope condemned the use of "slave labour" in the local clothing industry.

As bulldozers and cranes worked to remove the rubble of the eight-storey building on the outskirts of Dhaka, a senior army officer said the number of confirmed dead stood at 411 while around 140 people were still missing.

The impoverished nation's worst industrial accident, which has focused attention on hazardous conditions in Bangladesh's factories making Western labels, brought tens of thousands of protesters onto the capital's streets.