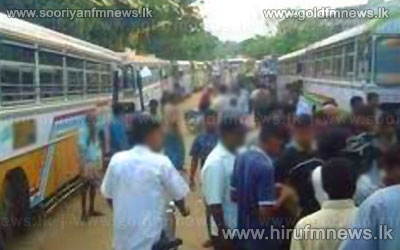 The strike initiated by the private bus employees of buses plying the Colombo – Chilaw route has reached its second day today.

The employees of the Chilaw passenger transportation service engaged in a protest today in the Chilaw town alleging that the authorities have failed to apprehend the suspects.

Chairman of the passenger transportation services of Chilaw Chaminda Hansa expressed the following views regarding this.

Our regional correspondent stated that due to the strike, the police have been deployed to protect the long distance private buses that pass the Chilaw town.

Upon inquiry by our news team chairman of the National Transportation Commission Roshan Guanawardena stated that the police have already arrested the suspects in question.