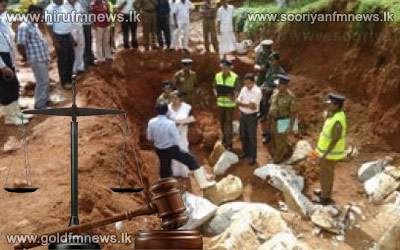 The relatives of missing persons during the youth insurgency in 1988-89, submitted 13 petitions with regard to the case on the Matale mass grave today.

The petitioners pleaded the court to probe Matale Mass Grave findings as the bones of their missing relatives believed to be among the unearthed human skeletons.

Having considered the petition, Matale Magistrate Chaturika de Silva declared that the 13 petitioners will be party to the on-going case.

The Magistrate also ordered the CID to obtain a statement from the petitioners. She stated a ruling will be announced after the petition is considered on Friday.

Attorney-at-law Sunil Watagala, who appeared with another 9 lawyers on behalf of the petitioners, explained the current proceedings of the court.

Several petitioners who believed that the bones of their missing relatives are among the unearthed skeletons expressed their views to our news team.

JVP parliamentarian Anura Kumara Dissanayake who was also present at the court expressed his view to our news team.