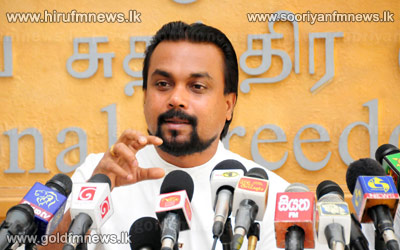 National Freedom Front has requested the President not to hold Provincial Council Elections in the North without correcting the clauses of the 13th amendment that are supporting separatists’ movements in the country.

Speaking at a media conference held in Colombo today NFF leader, Minister Wimal Weerawansa said that his party will launch several campaigns soon to educate people on this matter.

Minister Weerawansa believed that the Tamil National Alliance will gain power in the Northern Provincial Council if the proposed election is held under the present system.

He also charged that present Indian leaders are supporting the US in its effort to set up a US center in South Asia.

Minister Weerawansa said that India has been facilitating an agreement which would allow the US to use the Maldives islands for American defense activities.