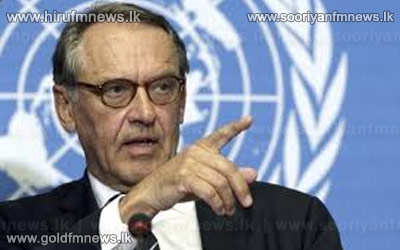 Deputy UN Secretary-General Jan Eliasson states that the Petrie report commissioned to investigate the role of the international body during the final stages of the war in Sri Lanka would most likely conclude by the end of next month.

Addressing the UN’s daily media briefing in New York yesterday, Eliasson stated that the final stage of the reports evaluation was currently underway.

The Petrie report controversial in nature criticized the UN’s role in Sri Lanka especially during the final stages of the conflict.

According to Deputy UN Secretary-General Jan Eliasson the aim of the report is to prevent similar occurrences in future.

When inquired from Eliasson as to when UN Human Rights Commissioner Navaneethan Paillai would make her visit to Sri Lanka he noted that discussions with Sri Lankan officials in this regard were still proceeding.