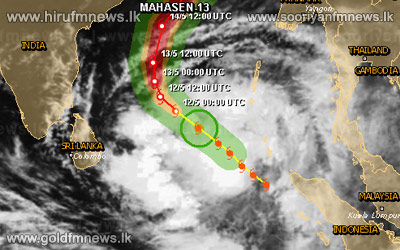 The Department of Meteorology today warned naval and fishing communities to refrain from their activities in the sea areas off East coast as strong winds and rough conditions are expected due Cyclonic Storm “Mahasen” in the South-east Bay of Bengal.

Cyclonic Storm “Mahasen” is centered about 700km to the East of Mullaitivu and is expected to intensify further and will most likely to move North-westward direction.

The Met. Department said As such sea areas off the coast extending from Jaffna to Hambantota via Batticaloa will experience strong winds rough conditions and intermittent rain.

Duty meteorologist Pabodini Karunapala elaborating further had this to say.......

Speaking to our news team Venerable Siriketha Seewali thro noted that such a term was derogatory.