JVP to move a motion against the Attorney General's petition. 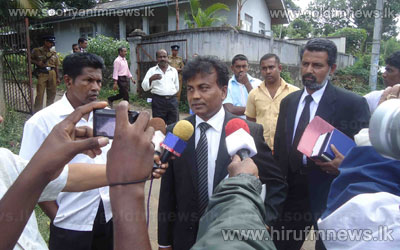 The JVP says that they have decided to move a motion against the special appeal the Attorney General had submitted to the Supreme Court on 30th ultimo with regard to the removal of former Chief Justice Shirani Bandaranayake from the post.

The Attorney General had also submitted an appeal to the SC petitioning for the invalidation of the PSC decision of removing former CJ Dr. Shirani Bandaranayake from her post.

Accordingly the SC has ordered that JVP MP Vijitha Herath and TNA leader R. Sambandan to appear before court on 29th instant.

However JVP Provincial Councillor Attorney-at-law Sunil Watagala said that so far MP Vijitha Herath had not been noticed about it.