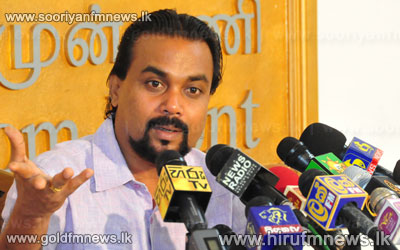 Minister Wimal Weerawansa says that he is not prepared to accept the challenged made by the Bodu Bala Senaa.

Minister Wimal Weerawansa said at a function recently held in Lidula that it had been revealed that a Buddhist organization working against the Muslim community had held links with the Tamil diaspora.

The Bodu Bala Senaa responded to this at a media briefing convened in Colombo yesterday.

On this occasion Bodu Bala Senaa general secretary Venerable Galagoda-Atthe Gnaanasaara Thero thus threw down a challenge to Minister Wimal Weerawansa that he makes the relevant disclosure immediately if, as per the Minister’s allegation the Bodu Bala Senaa had obtained money from the Norwegian Government.

Participating at a leaflet distribution campaign in front of the Colombo Fort Railway station the Minister responded to the challenge as follows: