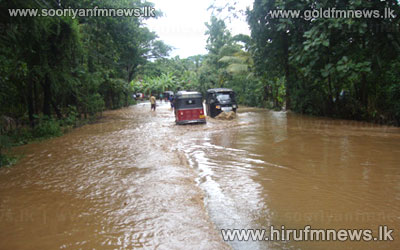 The water levels of the Kalu and the Kelani rivers have increased due to heavy rain pouring in the central hills.

Director of the Water Sciences of the Department of Irrigation Prema Hettiarachchi requested the residents in the surroundings of the two rivers to be vigilant as minor floods have developed by the river areas.

The highest waterfall during the last 24 hours from 8.30 am was 409 mili metres which recorded from Canyon area.

Meanwhile the Department of Meteorology stated that further rain and wind could be expected despite the tropical cyclone in the Bay of Bengal has moved away.

Meteorologist on Duty Anusha Warnakaulasuriya describing the weather situation had this to say.

The Disaster Management Center stated that the threat of the earth moving is still prevailing in the districts of Nuwara Eliya, Kegalle, Matale, Galle, Ratnapura, Kurunegala and Kandy.

7 persons were killed and 3 others still missing due to inclement weather conditions during the last few days.