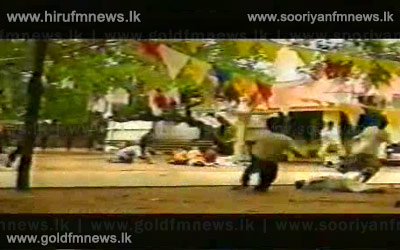 Today marks the 28th remembrance of the brutal massacre of 146 Buddhist pilgrims by LTTE terrorists at the sacred Jaya Sri Maha-Bodhi in Anuradhapura.

On 14th May, 1985 - a Sunday, the entire nation and the Buddhist world were shocked at the news of the barbarism displayed by the notorious terrorist outfit the LTTE, at unarmed innocent civilians including the clergy, women and children.

As later revealed, the attack was masterminded by the megalomaniac terror chieftain Prabakaran himself, intended at flaming communal hatred and a spree of island wide mob attacks targeting innocent Tamil civilians.

The LTTE terrorists had snatched a public bus on that ill-fated day, stormed the central bus stand at the Anuradhapura old town and splashed those present there with a rain of gunfire indiscriminately.

The terrorists had opened indiscriminate gunfire at both the upper layer and the lower layer killing scores of pilgrims and the clergy.