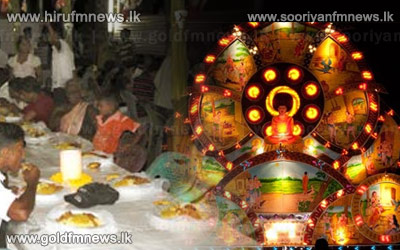 The Coordinating Secretary to the Secretary of the Ministry of Buddhashashana & Religious Affairs states that a release issued bearing the signature of the Ministries Secretary should be revised.

The release issued bearing the signature of Ministerial secretary M.K.B. Dissanayeke a short while ago stated that the public should refrain from exhibiting pandhals & Lanterns on the day of Vesak while also requesting of them to preclude from hosting alms stalls.

However according to Commissioner of Buddhist Affairs Chandra Premagama hosting alms stalls does not constitute an offense due to the nature & religious background of the Vesak ceremony.

When contacted Secretary to the Ministry of Buddhashashana & Religious Affairs M.K.B. Dissananayeke noted that he was unable to provide our news team with further details in this regard due to having taken ill.

However his Coordinating Secretary Ganaga Dissanayeke added that it was only contests & exhibits which were banned during the day of Vesak & not pandols & alms stalls.

The press release stated that all taverns, slaughter houses, Casinos, night clubs and fish and meat stalls throughout the island should be kept close.

It also stated that the people should engage in religious activities at the places of worship instead of assembling at various places.