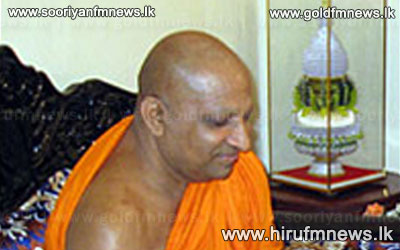 Mahanayeke of the Malwathu Chapter Most Venerable Thibbatuwawe Sri Sumangala Thero states that at a juncture when the Northern Polls are to be held discussions regarding the nullification of the 13th amendment to the constitution should not be done.

The Venerable Thero made this observation when Deputy Minister of Buddha sasana & Religious Affairs M.K.D.S. Gunawardhana paid his respects to him.

Meanwhile the Lanka Sama Samaja Party states that if a draft bill is presented before parliament seeking the nullification of the provincial council system which was established under the 13th amendment to the constitution, steps would be taken to defeat it.

Media Spokesperson of the Jathika Hela Urumaya Nishantha Sri Warnasinghe speaking to our news team yesterday noted that steps would be taken to submit the draft in this regard before parliament during the course of the next 2 weeks.

General Secretary of the Lanka Sama Samaja party Senior Minister Professor Thissa Witharana speaking to our news team noted that if plans are underway to introduce an amendment to the constitution such a decision should be based upon consultations with all parties.

Speaking further Media spokesperson of the JHU Nishantha Sri Warnasinghe added that the JHU hopes to hold discussions with all relevant parties in this regard in the near future.