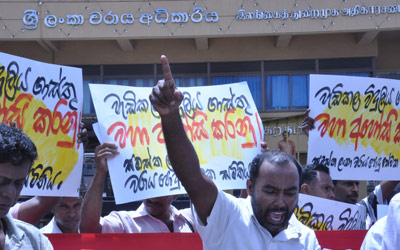 Various institutions in the island expressed their support for the strike initiated by the opposition trade unions in protest of the increased the electricity tariffs by organizing protests.

A protest was organized today opposite the main office of the water board in Ratmalana.

Chairman of the water board employees association Piyal Kalutarage made the following statement.

Farmers and businessmen were also requested to lend support to the token strike.

However, our regional correspondent reported that activities in the Dambulla economic center were carried out as usual today.

Several farmers and businessmen expressed the following views while speaking to our news team.

Our regional correspondent in Anuradhapura reported that all the shops in the Anuradahpura town were closed for 3 hours in support of the token strike initiated today.

Meanwhile, our regional correspondents also reported that a majority of business establishments were closed in the regions of Deniyaya, Puttalam, and Hatton and black flags were flown as well.

However, upon inquiry by our news team from the co convener of the People’s movement for justice, S. Amarasinghe, he stated that this token strike was a unsuccessful anti government conspiracy.

As a result of the opposition members attending the meeting with black arm bands, a tense situation arose in the Wayamba provincial council and the Central Provincial Council opposition members had left the council in protest against the increased electricity tariffs.