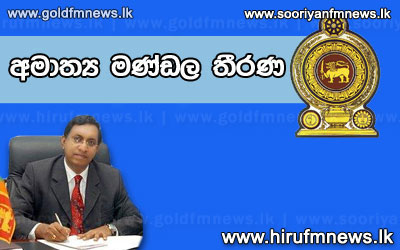 Minister Anura Priyadarshana Yapa said that the Northern Provincial Council election will be held next September according to the 13th Amendment to the Constitution.

During the media briefing to inform the cabinet decisions held in Colombo this morning, Minister Yapa said any changes to the 13th Amendment if necessary, it should be done after lengthy discussions and negotiations with other political parties.

Minister Yapa also replied to an allegation made against him by UNP General Secretary MP Tissa Attanayake during a media briefing held in Colombo yesterday.

During the yesterday’s media briefing, MP Tissa Attanayake described about the crude oil used in the Sapugaskanda Oil Refinery.

Minister Anura Yapa replied in the following manner during the meeting.