11 UNP members supporting the constitutional amendment ; ExposÃ© by the JHU 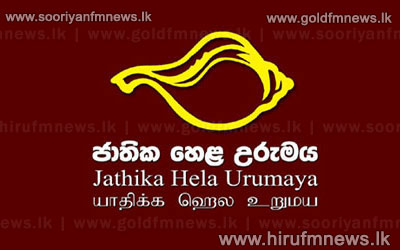 Hela Urumaya said today that 11 UNP parliamentarians agreed to support their new Draft Proposal which offers to remove certain conditions of the 13th Amendment that would stand detrimental to the country.

Hela Urumaya also urged all members of parliament irrespective of their party policies should be allowed to cast their vote according to their consciousness in the 19th Amendment to the Constitution.

Hela Urumaya stated that the 13th Amendment has challenged the sovereignty of the State, its territorial integrity and the Independence though it has given provisions to form Provincial Councils today.

The party also points out that it would bring dire consequences to the country, if the land and police powers under the current 13th amendment are put into practice.

During several media briefings held in Colombo today, views were expressed on the 13th Amendment as the Northern Provincial Council election is nearing.