Monk who self immolated in critical condition; 2 letters to journalists before immolation 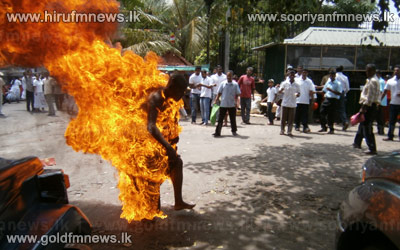 Director of the Colombo National Hospital Dr. Anil Jasinghe states that the condition of the Buddhist monk who self immolated him self this morning, Venerable Bowaththe Indarathana Thero remains critical.

Around 95% of the Thero’s body has sustained sever burn injuries.

A former JHU Pradeshiya Sbha MemberVenerable Bowaththe Indarathana Thero had set fire to himself before the Sacred Temple of the Tooth in Kandy this morning.

Subsequently he was admitted to the Kandy general hospital & was later transferred to the Colombo national hospital via a air force helicopter.

Prior to his immolation Venerable Bowaththe Indarathana Thero had passed down two letters to our Kandy correspondent.

One of the letters had been addressed to President Mahinda Rajapaksa & the other had been a declaration made to the sacred tooth relic.

A considerable amount of requests had been contained in both letters while the prime request had been purge cattle slaughter from the country.

According to our correspondent the Thero had set himself on fire leaving devotees before the Temple of the Tooth in shock.

Venerable Bowaththe Indarathana Thero who contested the 20011 provincial polls under the JHU ticket was elected to the Palmadulla Pradeshiya Sabha securing 3,664 votes.

However since the thero had not attended the final 7 sessions Palmadulla Pradeshiya Sabha he had been expelled from his seat.

Spokesperson of the JHU Nishantha Sri Warnasinghe speaking to our news team made the following observations in this regard.