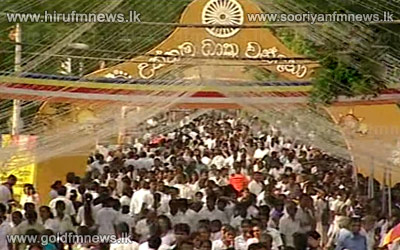 The ‘Uththama Dhathu Wandana’ relic exposition organised jointly by Hiru FM & Hiru TV parallel to ‘Hiru shakya Singhe Mangalya’ got underway amidst the blessings of the Maha Sangha & participation of thousands of devotes.

The relics which were flown from India’s Kapilawasthu were placed on a special platform built for the exposition by Chairman of the ABC Media Networks Rayynor Silva.

The relics were escorted to the location of its exposition via a special motorcade.

The ‘Hiru Shakya Singhe Mangalya’ which commenced yesterday was lit up

utilising 100,000 oil lamps as well as thousands of floral tributes.

Devotees are able to pay their respects to the relics until the 27th of this month.

According to our correspondent more than 100,000 have gathered at the Katharagama Kiri Vehera sacred grounds.