Body of monk who self immolated himself sent to Rathnapura based on court order; Sinhala Rawaya launches protest demanding for body 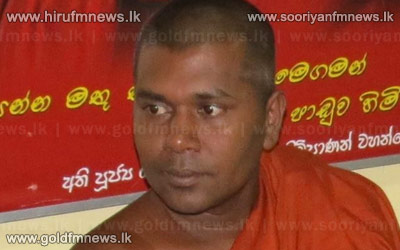 The final rights of Venerable Bowaththe Indarathana Thero who self immolated himself before the Sacred Temple of the Tooth is scheduled to be held at the Kahawaththa-South Panawella- Sri Sugatharama Vihara on Wendsday.

The body of the venerable thero was laid to rest at a private funeral parlor in Rathnapura this afternoon before it was led to the Kahawaththa- Sri Sugatharama Vihara.

Venerable Bogahawaththe Indarathana thero set fire to himself on the day Vesak, before the temple of the tooth opposing cattle slaughter.

Subsequently the thero who sustained severe burn injuries was admitted to the Kandy General Hospital & was later transferred to the Colombo National Hospital.

The thero who passed away at around 8.10 last night was receiving treatment at the Intensive Care Unit of the Colombo National Hospital.

Meanwhile the Sinhala Rawaya Organisation states that injustice was meted out to it when representatives of the organization had arrived at a private funeral parlor in Colombo to claim the body of late Venerable Bowaththe Indarathana Thero.

Chairman of the Sinhala Rawaya organization Venerable Akmeemana Dayarathana Thero expressing his views in this regard added that that the body which had been sent to a private funeral parlor in Borella had been taken to Kahawaththa in a clandestine manner.

Moreover the Sinhala Rawaya Organization engaged in a protest this afternoon.

Owing to this the Galle road was closed for traffic from Colpitty junction to Galle Face.

The protestors demanded not to send the body of the self-immolated monk to his home town in Ratnapura.

Anti-riot squad personnel were also called into the area subsequently.

According to Police Media Spokesperson SP Buddhika Siriwardhana based on a request made by the Sri Sugatharama Vihara in Kahawaththa, court ordered that the body of Venerable Bowaththe Indarathana Thero be handed over to the chief incumbent of the temple.

Based on the court order the body of the thero was subsequently escorted to the Kahwaththa Sri Sugatharama Vihara.

During two media briefings convened by the National Sangha council & JHU urgency was expressed regarding the passing of the animal cruelty act as well as the anti conversion act in parliament.

Moreover a request was made from all members of the public to hoist a yellow flag at every home, office, vehicle & religious institution as a sign of respect to the late thero.

Meanwhile Central Working Committee Member of the JHU Thebuwala Piyananda Thero had this to say in the following regard.

According to our correspondent the funeral committee which had convened to discuss the final rights of Venerable Bowaththe Indarathana Thero has scheduled the funeral of the thero for Wednesday.