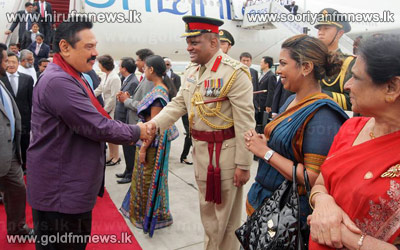 President Mahinda Rajapaksa who left for China on a four-day state visit has arrived in China this morning.

The President was received by Chinese Vice Minister of Foreign Affairs Liu Zhenmin along with Sri Lanka’s Ambassador in China Ranjith Uyangoda at the Beijing Capital International Airport.

President Rajapaksa will participate in several bilateral meetings in Beijing including the Inaugural Ceremonies of the Global Service Forum.

Later he will travel to Shaanxi Province to attend the opening ceremony of the 2013 International Conference of Asian Political Parties under the theme of ‘Promote Green Development and Build a Beautiful Asia’.