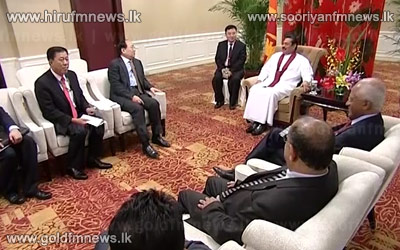 President Mahinda Rajapaksa who is on a four day state visit in China says that the development agenda passed on to the country by colonial rulers was totally changed.

During a meeting held this morning with the President of the China Eximbank  Li Ruogu, President Rajapaksa thanked the bank President Li Ruogu for ample assistance extended to various development projects in Sri Lanka.

President’s Media Unit stated that President Rajapksa has sought further assistance from the China Eximbank for several future development projects in the country.

In response to President Rajapaksa, Li Ruogu has told that he was satisfied with the development achievement of Sri Lanka and pledged to extend further support towards its development schemes.