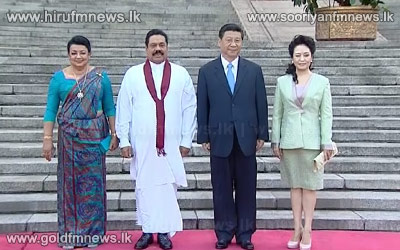 President Mahinda Rajapaksa met with his Chinese counterpart, President Xi Jinping at the Great Hall of the People in Beijing yesterday.

The two leaders held bilateral talks encompassing several areas, strengthening Sri Lanka- China relations and laying the base for a new era of friendship and cooperation.

President Rajapaksa was accorded a 21-gun salute on arrival and he later inspected a Guard of Honour.

During discussions, China pledged to provide further funding to develop Sri Lanka’s transport sector that includes a number of expressways, road networks and railway lines, including a new Colombo-Jaffna Expressway.

The agreement was one among several others reached during the bilateral meeting.