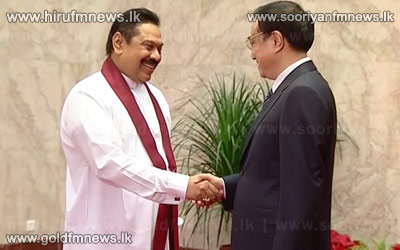 Chinese Prime Minister Li Keqiang met President Mahinda Rajapaksa yesterday at the Great Hall of the People and assured him that the trade imbalance, which is now in favour of China, will soon be addressed to benefit Sri Lanka as well.

Prime Minister Keqiang said China will explore the possibility of establishing an industrial zone in Hambantota.

Prime Minister Keqiang further reiterated China’s commitment to following through on all the development projects that were agreed upon during the bilateral agreements on Tuesday.

President Rajapaksa, who is currently on a four-day state visit to China, thanked the Chinese government for its continuous and multifaceted support of Sri Lanka’s development and noted that the East Asian nation has become a key development partner in Sri Lanka’s post-conflict era.