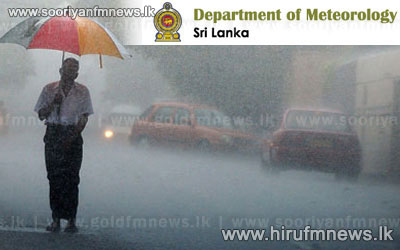 The Department of Meteorology states that showers may be experienced in the Western, Sabaragamuwa, Central & Southern regions of the island this evening.

According to Duty Meteorologist at the Met. Department Merryl Mendis the highest rainfall during the past 24 hours was reported from Colombo Fort.

Meanwhile two sluice gates of the Kukuleganga Reservoir were opened due to the Incessant rains being experienced, while the Kalawana Route & the Molkawa-Bulathsinhala routes have been inundated.

Deputy Director of the Disaster Management Centre Pradeep Kodipillai speaking to our news team expressed the following views on the current situation.