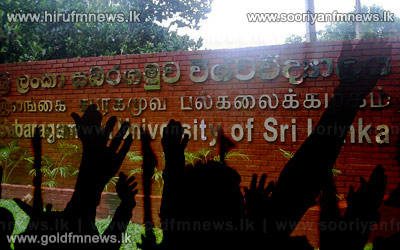 The protest launched by students attached to the University of Sabaragamuwa demanding claims over their examination rights, which was done blocking the Colombo-Badulla main route was dispersed by police this afternoon.

According to police a tense situation ensued before the protest was broken up, since the students had been obstructing members of the public.

According to Acting Police Spokesperson SP Prishantha Jayakodi 12 police officers had been injured while attempting to break up the protest, while 6 students had also been placed under arrest.

Meanwhile Convener of the Inter University Students Federation Sanjeewa Bandara speaking during a media briefing which was convened today accused the police of assaulting students who were protesting.

However when inquired, Minister of Higher Education S.B. Dissanayeke stated that the administration of the Sabaragamuwa University would not subjugate its self to students.

Higher education minister further said that students who engaged in the strike will be punished.

Meanwhile issuing a release the United National Party urged authorities to immediately release the students who have been placed under arrest.

UNP MP & Party General Secretary Thissa Aththanayeke speaking in this regard also urged the government to provide solutions for the grievances of these students.