Today marks the 26th Year since the Aranthalawa Massacre 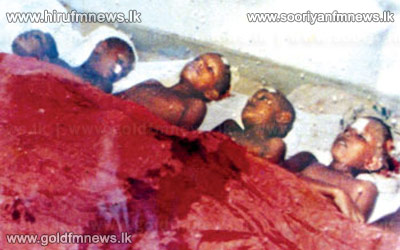 Today marks the 26th Year since the Aranthalawa Massacre.

The Aranthalawa Massacre was the massacre of 33 Buddhist monks, most of them young novice monks, and four civilians by the LTTE on June 2nd, 1987 close to the village of Aranthalawa, in the Ampara district.

The massacre is considered one of the most notorious and devastating atrocities committed by the LTTE.

The Aranthalawa Massacre took place when a bus carrying Buddhist monks and a few unarmed civilians were ambushed by the LTTE cadres near the village of Nuwera-thanne.

They then ordered the driver of the bus, which was carrying the monks on a pilgrimage from their temple in Mahavapi to the Kelaniya Raja Maha Vihara, to drive into the nearby Aranthalawa jungle.

Among the dead were 30 young novice monks and their mentor, the Chief Priest of the Vidyananda Maha Pirivena, Hegoda Sri Indrasara Thera.