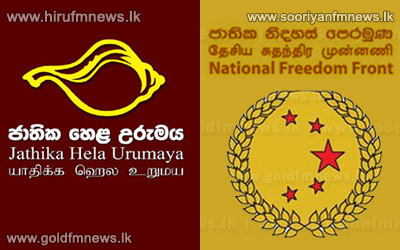 JHU has called a special meeting to discuss about the Cabinet Paper on the changes to the 13th Amendment which is scheduled to be presented to the Cabinet meeting tomorrow.

The party meeting chaired by President Mahinda Rajapaksa yesterday decided to present this bill to the Cabinet meeting and get its approval tomorrow after changing two clauses of the 13th Amendment.

JHU has already presented a draft bill in parliament to make changes to the 13th Amendment.

However the JHU expects to announce it stand on the decision taken at the yesterday meeting after they further discuss the matter at the special party meeting to be held this evening.

NFF has also convened a meeting this afternoon to announce its stand on the decision taken at yesterday’s government meeting.