JHU decides on 13th amendment today; Hakeem returns to the island to make a decision. 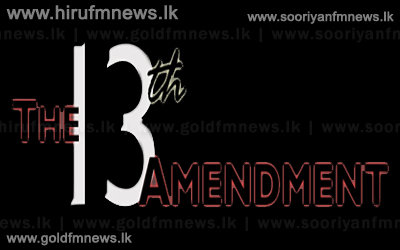 Meanwhile Sri Lanka Muslim Congress too is scheduled to take a decision on the subject today.

Accordingly SLMC leader Minister Rauff Hakeem currently in Palestine for attending the International Islamic Conference is scheduled to urgently return to the island.

Justice Minister Rauf Hakeem’s Media Secretary Dr. A. R. A. Hafees told our news team that the Minister is scheduled to speak at the cabinet meeting next Thursday about the impact and power devolution that would take place as a result of the proposed amendment to the constitution.

Minister of Construction, Engineering Services, Housing and Common Amenities Wimal Weerawansa said that the President expects to obtain the opinion of the Supreme Court regarding the police and the land powers of the 13th Amendment.

Addressing a press conference yesterday, Minister Weerawansa said that the President had instructed the Leader of the House Nimal Siripala de Silva to set up Parliament Select Committee.

Minister Wimal Weerawansa explaining the matters discussed at the meeting yesterday had this to say.

Although Minister Weerawansa introduced the changes to the 13th Amendment is a victory, Left Wing parties including the Sri Lankan Communist Party which are partial towards Provincial Council System stated that the proposed changes would not do any harm to the existing system.

Speaking on behalf of the government left winged coalitions; Deputy Chief Secretary of the Communist Party S. Sudasinghe had this to say.

JVP Propaganda Secretary Parliamentarian Vijitha Herath said that his party is against only changing the clauses of the 13th Amendment.

UNP Parliamentarian Ajith P Perera said though his party has not taken a decision yet over the matter, it is clear that there is a dispute in this regard.